Corsicana is a business-friendly community located just 50 miles southeast of downtown Dallas on I-45, which connects the Dallas-Fort Worth Metroplex with the Greater Houston metro area.

Corsicana's robust transportation infrastructure, combined with its proximity to a number of major consumer and industrial markets, makes it a perfect location of warehousing and distribution centers. 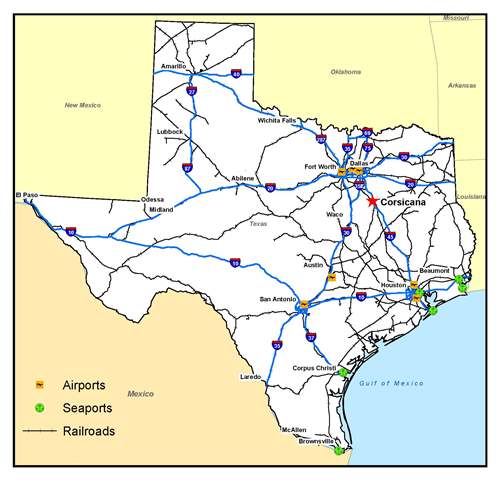 Proximity to Airports Corsicana has easy access to a variety of commercial and cargo airports:

Rail Access Corsicana is served by the following railroads:

Intermodal Access Corsicana is located within an hour's drive of several major intermodal terminals, giving manufacturers located in Navarro County a convenient alternative to the additional expense of a dedicated rail spur.

What makes Corsicana such a great location distribution centers, warehouses and other key supply chain operations? Here are just a few of the most important reasons:

Dynamic transportation infrastructure With its proximity to the Dallas-Fort Worth metroplex, Corsicana has easy access to the Metroplex’s extensive transportation network. Located just 50 miles southeast of downtown Dallas on Interstate 45, which connects the Dallas-Fort Worth metroplex with the Houston metro area. Corsicana is also only 40 miles from Interstate 20, a major east-west artery, as well as being less than 45 miles from Interstate 35.

Corsicana is only an hour from DFW International Airport, and about 75 minutes from Alliance Airport. Corsicana is served by both Union Pacific (UP) and Burlington Northern Santa Fe (BNSF) railroads and is only 210 miles, by interstate highway, from the Port of Houston and 230 miles from the Port of Beaumont.

Solid workforce Corsicana and Navarro County provide employers with access to a relatively large and robust workforce, coupled with a strong work ethic. In addition, the community is able to draw a significant portion of our workforce from the Dallas-Fort Worth-Arlington metro area.

Lower operating costs The cost of living is dramatically lower in Texas, and even more reasonable in Corsicana, which means that your workers can enjoy the same, or better, quality of life in Corsicana for less than you're paying them at your current location. Available land is plentiful , with prices substantially lower than in most of Texas and the rest of the United States.

Texas' pro-business climate Texas, with its vibrant economy, boasts low taxes without the onerous regulations typically found in other states. Texas does not levy either corporate or individual income taxes.

Conditional land grant A conditional land grant/loan may be available from the City of Corsicana and Navarro County to primary job-creating industrial expansion projects for capital investments with a minimum taxable value of $10 million and the creation of at least 50 new, full-time jobs. The land is in one of the two industrial parks jointly owned and operated by the city and the county.

Small town quality of life on the outskirts of the 4th largest metro area in the U.S. Corsicana is close enough to the Dallas-Fort Worth metroplex to take advantage of its extensive resources, while being just far enough away to also enjoy lower business operating and living costs. Corsicana is a community where you can grow a business, pursue a meaningful career, and raise a family … all at the same time. Escape the high costs of living and operating a business in the big city, and experience — in Corsicana — how life and work intersect.